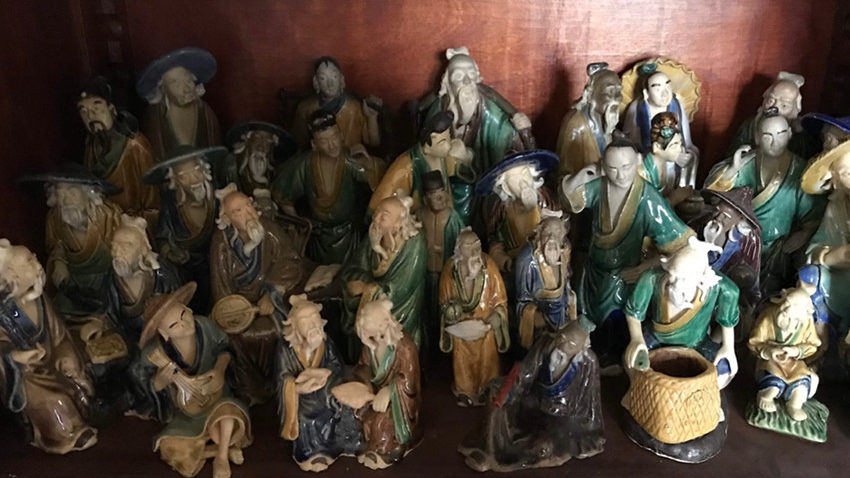 I have been planning this post for almost a year when I first saw an amazing collection in a friend’s home. I was struck not only by the size of this extraordinary grouping of objects but also how they were displayed and the variety that is available. Just an aside…female figures are quite rare and, therefore, extremely collectible. His collection proves my point of when you see something you collect or want to add to your collection BUY IT then and there. This assemblage of all sizes of this craft was collected over many years and before they became rare and increased in value. 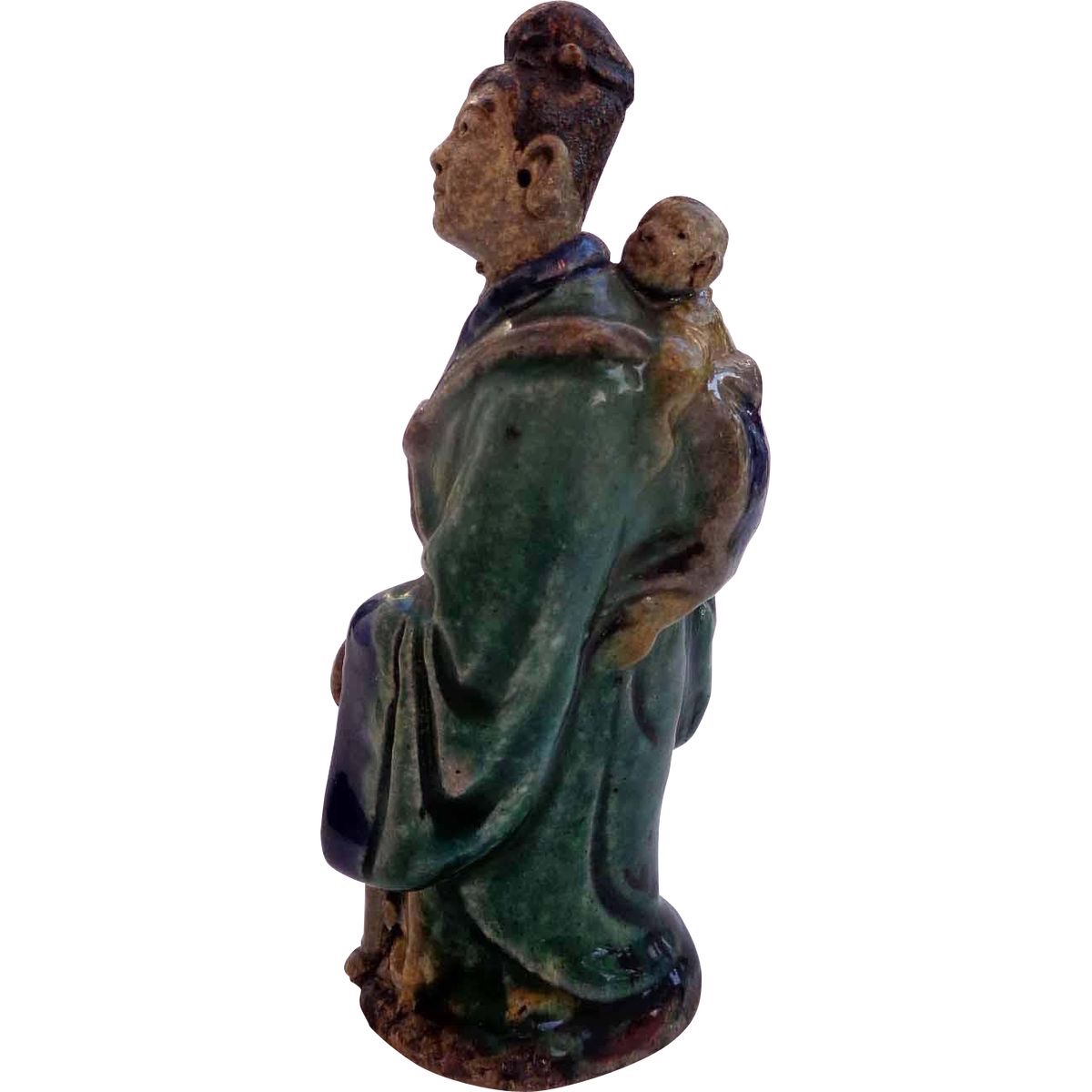 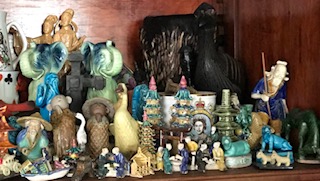 At the time, I didn’t realize that I actually had a piece in my Asian Collections that my Mother bought a zillion years ago in a wonderful department at Marshall Field’s, Field’s Afar. The buyers for this unique collection of objects sought the unusual and the best to house in the Store’s always changing variety. You can, if you are lucky, find some examples of this interesting art at the monthly RANDOLPH STREET MARKET.

Here he is…he is housed in a black velvet lined shadow box with weathered wood frame, I think he would have been holding a spear or staff in his uplifted hand. 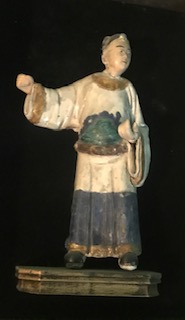 I am most certainly not an expert on this subject and while researching these fascinating works of art, I found a very detailed website that explores one collector’s passion for his collection.

The following information was taken, from an extensive piece from that renowned collector’s website, EVENSONG SHEKWAN MUDWARE. If the subject is of interest to you I highly recommend you read this collector’s entire story as well as more on the history of mud figures, and thoughts on collecting them. It is a wealth of research and intensive detail…brilliantly done!!

Over 1000 years ago, Chinese artisans during the Tang Dynasty (618-907 AD), were creating landscape bonsai, miniature landscapes in a tray, a practice known as Pen’Jing. To capture the realism of a favorite countryside or mountain scenic view, the artists added rocks and planted small trees in a large ceramic tray to simulate the panorama on a smaller scale. These were intended to invoke a harmonious feeling to the viewers.

In an effort to capture the illusion, the Chinese artisans used figurines of people, animals, huts and temples, which gave an appearance of great age and size to the miniature forests. Figurines have had a place in bonsai as a visual contribution. Penjing, nearly a lost art form, is experiencing a revival in modern day China and is once again popular with Chinese bonsai enthusiasts.

The prosperous Manchurian Ch’ing Dynasty (1644-1912) began declining at the end of the 18th century. The successful export market for fine china was impaired by excessive competition for the wares. Pottery and figurines dominated the Chinese export trade well into the next century. Mud figures thrived, as they were different from ordinary figurines. They were made individually by hand and involved nearly all members of the village. Mudmen were brightly glazed figurines of men, women, wise men and old sages, seated or standing, holding flutes, scrolls, pots, fish and other objects of mystical importance or sometimes fishing. After completion of the rice harvest and the dry season set in, villagers turned to figurine production to stimulate the economy.

For smaller ones, the artist just picked a small piece of mud and in no time made a figurine out of it by using their two fingers. For the average-sized figure, the ‘mud’ or clay for the figures was pressed into a mold by hand. Each part was individually molded and assembled by various crafters at the appropriate time — thus, the varying degrees of quality in the pieces. Once the torso was removed from the mold, the extremities — head, hands and legs or feet — were added, along with the hair, hats, beards and other items. To add further detail, eyes, nose and ears would be pierced. Then the entire collection was fired in a kiln to cure the clay. Fingerprints can often still be seen, immortalized in the fired clay.

Each mudman was hand painted with a low temperature lead glass glaze in yellow, blue or green glaze with the occasional use of white or brown. The face, hands and feet were left unglazed to expose the natural color of the mud. The rocks, shoes or sandals were painted with a dark brown, almost black under-glaze, that was often used to paint hair and facial features as well. Occasionally the rocks were painted a red oxide or yellow ochre.

In the late 19th century to the mid 20th century, mud figures continued to be produced in South China, with the exception of the popular water carrier, which originated in Jiwah, near Hong Kong. The smallest figures were used as backdrops in fish tanks or bonsai, while the larger figures were used in planters. The exceptionally large muds were sometimes made into lamp bases.

The larger figures can be found at Stone Bay of Kwangtung. These figurines can cost thousands of dollars if they are made by the masters. Today, the antique mud man is a highly collectible item. Surviving examples were showcased in a large exhibition at the Hong Kong Fung Ping Shan Museum in 1979 and at the Chinese Culture Centre in San Francisco in 1994.”

Intrigued, good, let’s look at my friend, Earl’s, collection and how he has housed them in his home….first in a very large display case with multiple shelves…one could look at these for hours and not see everything, look at the depth of the figures… amazing… 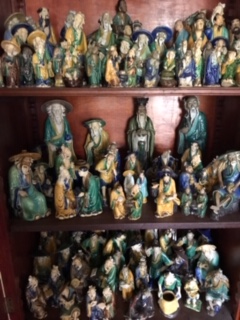 Another view, shelving to the floor 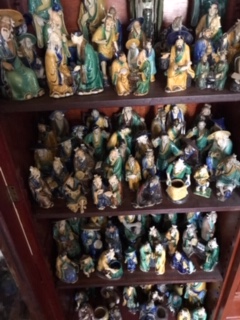 Next on wall shelves… 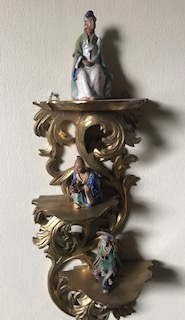 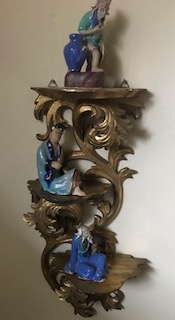 And then on table tops… 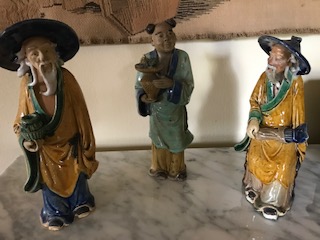 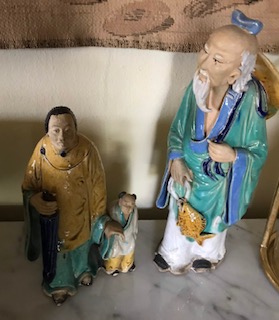 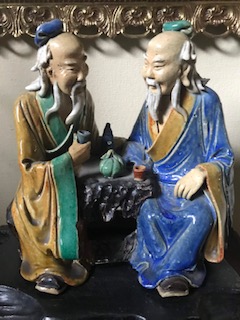 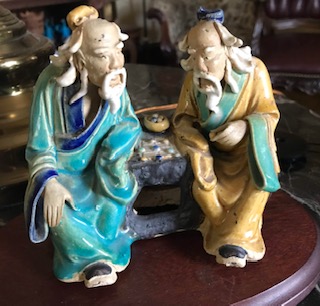 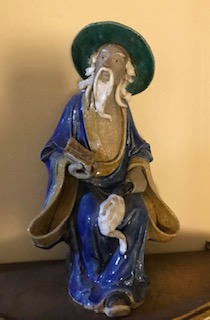 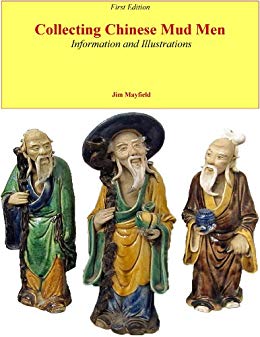 I hope this peaked your interest not only in Mud Men but in specializing when collecting anything. The most important thing to keep in mind…always collect what you like and remember after two items it becomes a collection! Enjoy the hunt!

ALL PHOTOS, WITH THE EXCEPTION OF THE FEMALE FIGURE WERE TAKEN BY ME WITH MY iPHONE CAMERA.